Yesterday Kelly and I visited the Sand Prairie Conservation Area near Benton, MO. It was a

beautiful, Fall day and it felt good to stretch our legs and enjoy a more open natural setting. Several trees dot the prairie and near a persimmon (Diospyros virginiana) there were dozens of Junonia coenia (buckeye) under the tree. As we got closer the smell of fermenting fruit was very strong. When Regis, the wonder dog, wandered under the tree to see what I was interested in (I am sure he thought: “he is very interested in something under there, it must be a squirrel…”), the butterflies flew sluggishly and landed just out of the way – similar to when I was running bait stations. They were drunk (or alcohol poisoned – a rose by any other name…)! The winter is coming and a little time with Bacchus celebrating the bounty of nature seemed appropriate. This is nothing new, it is well-known that butterflies feed on fermenting fruit, Seeing so many butterflies in one spot, was cool and made me happy. I can’t tell you if butterflies enjoy a persimmon wine or would prefer a pinot grigio, but I do know that the persimmon tree was THE place to be if you happened to be a butterfly at Sand Prairie C.A. yesterday and we were lucky enough to share some time with those whose time is short.

Yesterday was a sunny day and the backyard dried out enough for me to mow. Mowing the lawn is a nice long walk in the backyard, but a lawn mower isn’t the best wildlife observation/ meditation tool. Our walk behind, gas powered push mower isn’t too bad, but it is a mower none the less.

Before the mower was started I saw my first cool lep (yeah that is the way cool kids say Lepidoptera): Danaus plexippus (the Monarch)! This individual was very fresh (recent ecdysis), and most likely of the migratory generation (as there is no hope of raising a brood before it gets cold here in TN).  Danaus plexippus is a well-known insect migrant. There is something about seeing migrating animals: birds, insects, fish, etc in the process of migration that fills me with wonder and joy – it is an honor to vicariously share in the migration. Because this photo was taken on a pre-mow walk and Kelly reads the blog and will want to know where the Trifolium pratense is in the yard – this photo was taken near, but not in the yard. During mowing Limenitis archippus (the Viceroy) was in the yard and flying threateningly toward me when I passed near. These two butterflies are considered a classic example of mimicry. When I was a wee lad (late Pleistocene) the monarch was thought to taste bad/ be poisonous and the viceroy mimic was protected by resemblance. With all the scientific advancements since we discovered fire, we now know they both taste awful. This makes a lot more sense as the flight and behavior of these two species are very different and a predator could easily key into the different flight and snap up the tasty model. Because they are both nasty, I am certain most avian predators just use that old children’s rhyme: “Orange and black tastes nasty, Jack!” and avoid them both.

During the mowing there were a ton Hylephyla phyleus (fiery skipper). I do not know if this is a resident or if it recolonizes every year. I do know it eats my lawn, which is pretty awesome! It would be even cooler if it ate and controlled where the lawn encroaches the flower and vegetable beds, but it requires a sod (unsmiley face emoticon here). There were also some very worn Cupido comyntas (eastern tailed-blue) which feeds on the Trifolium repens (white clover) in the lawn. Both of these butterflies can use a non-native host, and have ridden the success of the host to very large populations in our area.

There were a couple of Junonia coenia (buckeye) basking in the yard. Our yard doesn’t have the correct food plants (yes, I have looked), but does offer good nectar sources for the adults. These are absolutely stunning butterflies. From the freshness of this individual, I am guessing that here in TN the adults can overwinter. I also saw Polygonia interrogationis by our shed, another butterfly that overwinters as an adult.

The star lep of the mow session was Cisseps fulvicollis (an eribid moth)! My original sighting was of the moth in flight crossing the backyard. The hindwings of this moth are a cool whitish color and I knew what it was instantly and realized that it was a Weakley County record. So I left the mower and began chasing the moth hoping to catch it in my hands. When we hit the fence, the moth flew through with ease – neither the dog or I have figured this one out… So I went back to mowing thinking about how cool it was to see C. fulvicollis. When the mowing was complete, I thought I would check out our native flower bed to see if C. fulvicollis was there (they are such flower pigs) – and sure enough it was!

There were a couple of species of microleps that I saw but did not attempt to photograph, identify, or capture them. I did collect a cool beetle: Epicauta pestifera (blister beetle), this was not only documentation the first time I had seen it in the yard, but also IPM  for our vegetable garden.

So, now you have some idea of what it would be like to mow the yard with me, have learned a little about urban, fall butterflies in TN, and why it takes me so darn long to mow the lawn.

It always is a sore point when a wildlife refuge has agriculture on it. The problems faced by wildlife are generally not a lack of cattle grazing pastures or wheat fields and it always feels that the refuge is managing something other than wildlife (or at least rare wildlife). Crop lands are annual habitats that might be dominated by a legume one year and a grass the next, they are challenging habitats for wildlife. Crop lands are, however; not devoid of wildlife as claimed by Craig Childs in his new book. Not to bash Craig Childs – the book: Secret Knowledge of Water is only awesome and I think we would agree on most issues – but I cannot repeat his observations and thinking he is demonstrating a bias and not accurately characterizing the system he studied. 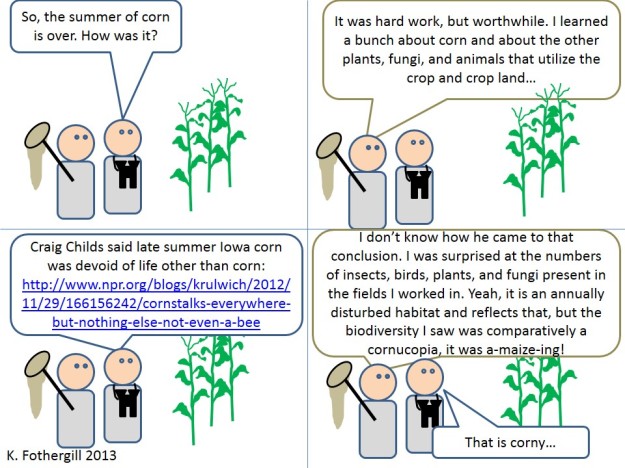 I was playing disc golf at Meeman-Shelby State Park just north of Memphis in Tennessee. 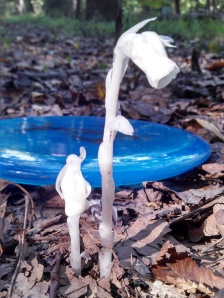 The course is very beautiful and most holes are in a very mature, hardwood forest. It was a surprise to find a good drive had landed next to Monatropa uniflora. This is a plant species that lacks chlorophyll and is found in dense, dark woodlands – which makes the stark, white plant stalk all the more stunning.

Without chlorophyll, the plant cannot produce its own food. Carbon fixation is what chlorophyll is all about, and I had always assumed these plants were parasitic on the nearby large trees that have lots of chlorophyll. It seems that Monatropa is actually parasitic on the mycorrhizal fungi associated with the roots of the trees.

This plant has been used as a pain reliever and can also be eaten. Plants like this are an important indicator of intact, complex systems and it is always exciting to see such species. Perhaps, the greatest human use is making one’s spirit soar. After I started looking for it, I found M. uniflora to be very common along the disc golf course. I would like to believe that people disc golfing in a mature forest is compatible with the forest – I sure hope so.

What may you ask is a ladybugapalooza? I don’t rightly know. Whenever you fill a space with predators it is certain to be a wild time… 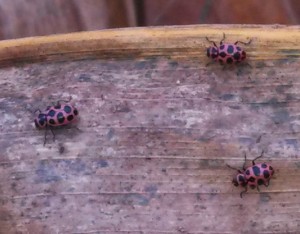 This weekend I felt like spending some quality time in some ready to harvest corn. Much to my surprise, I wasn’t alone – there were thousands of ladybugs, Coleomegilla maculata, with me in the corn. The corn was dried up, so any aphids were long gone. There were fungi producing spores, and so maybe they were feeding on them. Coleomegilla maculata is known to be able to complete its life cycle on pollen – maybe they can put on some overwintering fat by eating fungi? Regardless, this wasn’t an overwintering aggregation – unless they can overwinter in a combine…

This summer we grew a bunch of tomatoes in the garden. Kelly made bunches of tomato 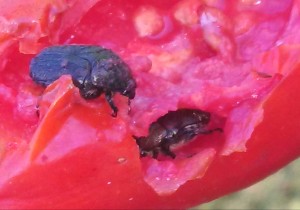 sauce (via the Steve Bouffard secret recipe), and we generally enjoyed the heck out of fresh tomatoes. An unknown someone else was enjoying the tomatoes too. The tomatoes would be partially chewed and left on the vine. At first I blamed those darn birds, but the damage didn’t look beak inflicted. Then I blamed the squirrels, but we don’t ever see squirrels in the back yard. The lack of frass was ruling out the usual insect culprits, and there were quite a few damaged tomatoes. In July Kelly found one Euphoria sepulcralis in a tomato, but who would blame Euphoria? Well, then we found more and as they say in crime novels: “the jig is up, see”.

Why were these beautiful flower scarabs molesting our tomatoes? University of Florida lists a Solanum species as a host for Euphoria sepulcralis and in general shows them to be quite naughty and pestiferous. Luckily we planted enough tomatoes to share a few. Perhaps feeding on our tomatoes made them a little more fecund, and 2014 will have even more Euphoria for us to enjoy!