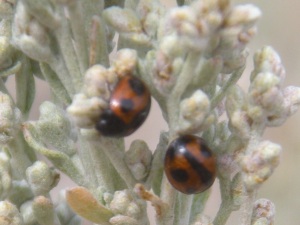 Last weekend, Kelly and I went for a hike in the South Hills on the Rimview trail. The hike started with a moose in the thick riparian growth along Rock Creek. It wasn’t long before we hiked out of the moose-infested riparian zone into shrub steppe. This is a fun trail because of the big views and it seems there is always something interesting. This time it was the ladybug, Brumoides septentrionis.

We encountered about a 100 B. septentrionis during our hike. I collected some to send to a few friends. All of the insects we found were on Artemisia tridentata (sagebrush) in developing inflorescences. Quite a few insects feed on A. tridentata, so predatory insects aren’t too surprising. I never found any scale insects, much less got to watch B. septentrionis feeding, so I can’t be certain of why they where in the infloresence.

After getting home I started examining the collected and photographed B. septentrions and found them to be variable with regard to the extent of the black markings on the elytra. A couple were so dark that I initially thought they must be Exochomus, but that was silly.

Once the observation of variability is made, then the questions begin to flow: what is normal? is there an advantage to being darker or lighter? are there dark and light individuals, or is there a wide range of possibilities? what factors maintain a diversity of markings? does coloration vary geographically? ad infinitum.

Which brings us to the moral of the story: observation. If not for looking at collected insects under the microscope and taking photos, I would not have noticed this in field. By using tools, we can extend the human senses. Sometimes our monkey brains find patterns in this extra sensory data, of course there are still exciting things to be found by simply looking. 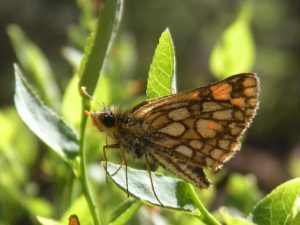 I like butterflies. A lot! It is always very exciting to meet a species of butterfly that I haven’t met before. I gain so much from the experience. This summer I had the privilege of meeting Carterocephalus palaemon. This is a butterfly I have been wanting to see in the field for a long time and have spent a bunch of time in appropriate habitat looking.

Kelly and I went backpacking up to Alpine Lake in the Sawtooth NRA, and sure enough, C. palaemon was hanging out in a high meadow. I chased a couple around with a camera and finally just enjoyed watching them going about their business. This butterfly is a species of concern in parts of its range, but not in Idaho.

In a perfect world I would have been able to follow a female to see what plants she lays eggs on, maybe found some caterpillars and learned what foods they eat. Maybe I would get to watch an Asilid take one as prey or learn how far they travel to find nectar plants and mates.

Just seeing them was cool, maybe next year I will get learn more about them. There are worse places to be than mountain meadows.

As a child, back in the late Cretaceous, I was obsessed with dinosaurs. When I was 12, I wanted to be a paleontologist. As I grew older I went for the money, fame, and easy women that typify the life of a biologist.

Recently, I had the opportunity to visit Dinosaur National Monument. It is so cool to see the dinosaur fossils left in place for all to enjoy and marvel at. I can highly recommend a visit.

I am glad to be studying the now.

Evidence of an epic struggle

Yesterday, while walking to the store. Kelly and I noticed a ornamental plum tree with sap coming out all over. The sap is the tree’s defense against bark beetles. The idea is the tree is ‘pitching out’ the beetle – forcing it out in the sap stream.

This tube represents success for the tree. If a beetle were still in the hole, the sap would be stained with frass. You can see how clean the sap has become. This tree probably had a 100 or so of these pitch tubes. We did not examine all pitch tubes to see what the success rate of the ‘pitch out’ is.

This tree is originally from Asia and is planted as an ornamental. A good guess (at least in my mind) as to the identity of the insect is Scolytus rugulosus. This is a Eurasian beetle. There is a growing body of evidence that the presence of non-native species can help other non-natives species establish.

Out here in the intermountain desert, Biological Soil Crust is a big deal. It is so important that many of you have never heard of it. I am not a soil crust expert, but I am trying to learn. Lichens are a component of Biological Soil Crust. Lichens are bizarre little (or large) symbiotic things comprised of a lichen and cyanobacteria and/or green algae. I was surprised that in some rare plant work I was doing, lichens were also to be surveyed: BECAUSE THEY WERE ON THE RARE PLANT LIST!! I was also surprised because lichens are something wonderful and important.  Additionally, I felt a hearty HOORAY! that they were being paid attention to!

Linneaus, our first taxonomist,  published Systema Naturae and set us down the three kingdom path of Animal, Vegetable, and Mineral. Under Linnean taxomy; lichens are clearly plants. But in a modern taxonomy; Lichens are possibly comprised of members of three kingdoms, none of which are plants! A quick visit to the USDA plants database  shows that indeed lichens are ‘plants’ at least for the USDA. This is actually a good thing: it means that botanists can be expected to work with lichens. (Show an entomologist a spider and they will quickly tell you it is not an insect, but many will help you anyway).

The rare plant survey we performed this August was grueling. One of our botanists had severe blister problems that weren’t going to heal no matter how much moleskin we used. The 100+ degree heat and off trail hiking had the bottoms of my feet beginning to separate from my foot (every step was ‘squishy’). On the last day, on the last transect, we were in slightly different habitat than we had been for the previous 4 days. Rattlesnakes were present and buzzing at me. I am not saying that rattlesnakes are bioindicators of cool places, but then again my experience says maybe they are.  Towards the end of a long, difficult field project there is always the danger of ceasing to be a biologist and becoming a tired human in bad need of a bath, beer, and food (depending on the project, the order of needs may be different). I enjoy the bath, beer, and food, but I also enjoy my job. 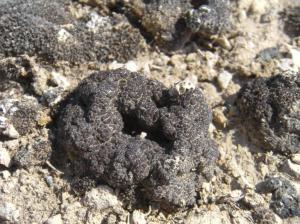 In the last few hundred yards of over forty miles of transects I documented Catapyrenium congestum, a super-rare, soil crust lichen! I hope that you check out some of the links in this blog and go out and enjoy some lichens, soil crust, or soil crust lichens on your own.

For all of you out there needing some information on New Mexico’s flora… Wooten and Standley’s 1915 Flora of New Mexico is yours by clicking the link. Sure, some names have changed, plant ranges have changed, and many plants have been added to flora; but old books have advantages. Older biological books often use really interesting phrasing that may or may not aid your understanding of the subject matter. Older biological books reflect older values and ideas, this helps us understand bias and can help us avoid it in our own work. Older works can be a window into the past. For instance, this 1915 Flora of New Mexico contains no mention of Bromus tectorum or cheatgrass, an introduced weed. Currently Bromus tectorum is well established in New Mexico. For many of us modern Westerners it is difficult to imagine desert areas without Bromus tectorum, but in the New Mexico of Wooten and Standley that was reality.